Designer of the week - Simon Spurr

Simon Spurr is a NY based men's designer who mixes the traditional English tailoring of Savile row's fit and quality, the European style slim suits, and the American street wear of selvage denim and bomber jackets all together in a fun, sleek sophisticated way . .....sounds interesting? well.... it also looks good! The result is a style that perfectly captures the mind set of the contemporary man who is looking for new ways of wearing traditional pieces to fit his more casual life style but still do it in a luxurious and sophisticated way. With a design philosophy of Style before Fashion i thought that Simon Spurr is a perfect fit for this blog therefore introducing the man and the brand seemed to be in order!


"when a man walks into the room you should notice him before the clothes. Style rather than Fashion always has greater longevity" Simon Spurr 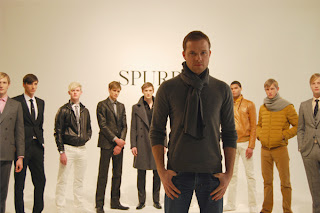 After graduating in 1996 from Middlesex University in London with BA in men's fashion design, the British born designer trained first with Hedi Slimane at YSL before coming to America, where he worked at Calvin Klein (senior designer of CK menswear) and Ralph Lauren (design director for RL purple label and RL black label). The above resume of designers and fashion houses, despite their differences, eventually influenced and shaped up the anesthetics and concept of his own brand. As describes by him: At Ralph Lauren, it was about building a brand and owning a look. At Calvin, it was more about removing excess ideas; stripping the design back to its purest form. And at YSL it was about working with color and proportion. "Hedi Slimane was my first true fashion mentor, and the first thing he did was throw the trend books out the window, and that's always stuck with me. I appreciate, I look, I listen, but on the whole I completely disengage from the rest of what's going on in fashion. I have a feeling, an emotion, that comes out in the form of clothes." - The words of true designer! 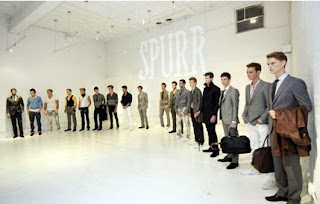 In 2006 Simon Spurr created SPURR - A contemporary, denim-based line that has since than branched out to a full-range collection, including suits, shirts, knits and even accessories such as bags and gloves, and although the brand is relatively new it quickly became a favorite among stylists and editors, and even got him a nomination with the CFDA last year
The 35 years old designer who just got married recently shows his line in NY fashion week , and for A/W 2010 he chose to showe a color palette of greys and browns, in a collection that included well fitted luxurious suits offered in both solid colors and bold plaid and stripes patterns, bomber leather jackets, and fitted outwear coats mixed with cashmere sweaters.
Simon Spurr envisioning his brand to be an American Luxury men's line and so far it seems like he is surly on his way. Currently the line is sold in Bergdorf, Barneys, Bloomingdale's, and Saks 5th Ave. in the US and selected boutiques and specialty stores in Canada and Dubai.