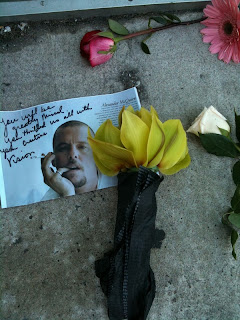 Alexander McQueen the influential British designer was found dead this morning in his apartment in London. Unconfirmed reports suggested that he had hanged himself, but that was not yet confirmed by the police. Alexander (real name Lee) who was only 40 years old have lost his Mom 9 days ago on Feb 2nd, a lost that was devastating to him. On his twitter page he expressed few days ago "Been a fucking awful week but my friends have been great but now i have to some how pull myself together and finish with the ..."
The death comes on the first day of NY fashion week, days before the start of London fashion week and less than 3 weeks before Paris fashion week.
Fans paid tribute to him outside his meat packing closed store.
Sad....Sad....sad......

photo by French Vogue
Posted by Boaz at 7:52 PM