eek's designer of the week is the British (what a shocker....) native Neil Barrett, one of the most innovative, independent talents in contemporary menswear and a leader of the deconstruction movement in menswear. Working and living in Milan Neil fuses classical tailoring with directional technology, or as he describes it "50% perfect and 50% aged and destroyed" focusing on a minimalist look with functional twist, or in other words..... the guy simply understands men and know what they want to wear!
Following two generations of tailors (his grandfather and great grandfather) it was almost a given that Neil would choose a career as a fashion designer. After graduating from Central Saint Martin's School of Art and Design and earning a Master’s degree in men's fashion design at the Royal college of art in London, Neil begun his journey (early 90's) in Florence working for Gucci. His talent was quickly acknowledged and he was promoted to senior menswear designer (not a bad start by any means.....). Five years later he launched Prada's first men's wear collection and under his direction, Prada became renowned among fashion insiders as the forerunner of "minimalist" menswear. After his success with these two fashion houses the next step was inevitable and in 1999 the Neil Barrett brand was launched with a men's collection. In 2002 collaborated with Puma for a collection of athletic sho

es that was available mostly in clothing stores rather than the traditional network of sports stores. A year later Puma named him Creative Director for a series of technical collections starting with Italy’s National Football Team. Team Italia wore Neil Barrett’s "on pitch kit" training and formal wear exclusively, ultimately winning the 2004 European Cup title and the 2006 world cup title (for those who don't know these are two of the most prestigious trophies in football (soccer)). Barrett became the first fashion designer ever to have exclusively dressed a national football team.
Barrett's design philosophy is simple: understanding what men want from their wardrobe! In his own words: "it isn't about changing clothes every week - it's about loving favorite pieces and wearing them to death, men don't want to look as if they've just walked off a runway" (well... i sometimes do but generally speaking show me one man who disagrees with him????) "It is too easy to color something up crazily to give it interest he adds, referring to his love for navy, white, black and grey. Anybody can do that. Up close with my clothes there's a lot going on with the seaming, pocketing or finishing. It's a balance between interest given to a garment without making it farcical, the number-one Neil Barrett style is treating fabrics as if they've been lived in. I try to make men look masculine and credible, while most designers throw out either a sexual, fey boys or

exaggerated super-macho men. It's one extreme or the other on the runway and not a lot to do with how real guys want to dress. You should look at a Neil Barrett show and either want to be that man, or want him" ....that is a long quote but one that sums him up....... once again...the guy just simply understands men and know what they want to wear!
His signature looks of rumpled leather jackets, sharply cut suits, and skinny jeans with a lived-in quality, intricate details, innovative finishes and meticulously chosen fabrics earned him a Hollywood following of A-Listers fans such as Brad Pitt, Mark Ruffalo, Ewan McGregor
Currently the Neil Barrett brand is on its 10th year and includes men's, women's and accessories lines. It is being fully produced in Italy by a Tuscan factory dedicated solely to producing Neil Barrett men's, and sold around the world through its own store and other retailers including online at Thecorner.com and Antonioli.eu.

LOOKS FROM THIS LAST FALL 2010 SHOW IN MILAN 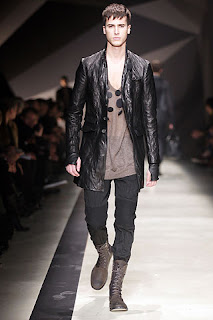 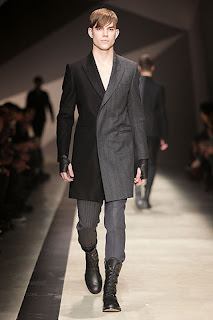 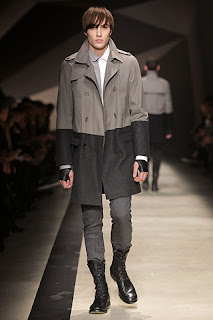 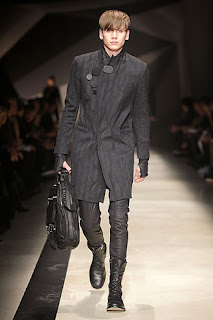 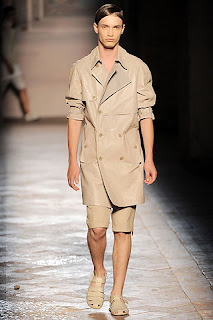 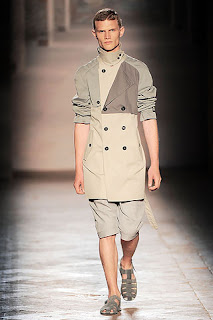 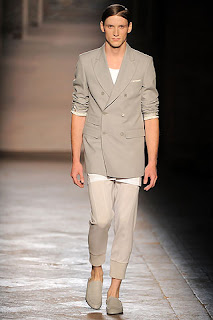 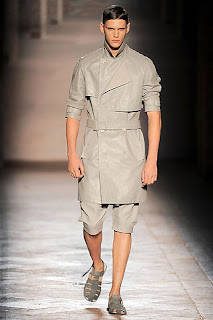 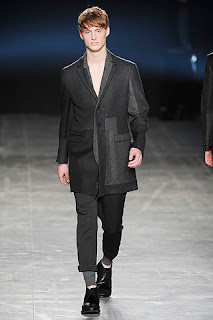 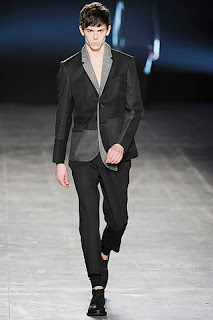 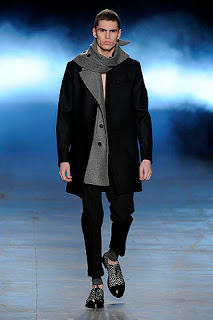 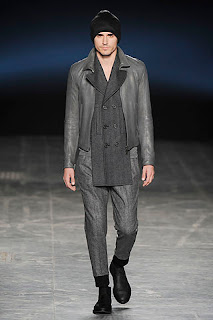 P.S
I saw the following Q&A on business week and thought it gives a deeper understanding of the designer's philosophy:

>THE FIRST RULE OF DESIGN IS... always follow your instinct
> I FIRST STARTED... by following the family tradition of tailoring
> I GET MY INSPIRATION FROM... my surroundings
> IT IS IMPORTANT TO BE AN INDIVIDUAL BECAUSE... it drives you to achieve more in life
> I FIRST REALIZED I WANTED TO BE A FASHION DESIGNER WHEN... it turned out to be the easiest subject I studied
> THE MOTHER OF INVENTION IS... Rei Kawakubo, founder of Comme des Garçons and the most inventive of all designers
> A GOOD IDEA... comes to you when you least expect it
> SPORTSWEAR IS... a word generically overused to describe anything not tailored
> THE DIFFERENCE BETWEEN WORKING FOR A LARGE COMPANY AND MY OWN COMPANY IS... responsibility
> INNOVATION IS KEY BECAUSE... it inspires
> UP CLOSE, MY DESIGNS... come to life, the attention to detail and proportion can be appreciated
> MEN LOOK BEST... when they appear not to have tried too hard
> I'VE ALWAYS BELIEVED... in pushing myself
> THE KEY TO DESIGNING AN ON-PITCH FOOTBALL STRIP FOR THE ITALIAN TEAM IS... understanding what they want
> THE BEST WAY TO RELAX IS... sleep
> MY FAVORITE PERSONAL FASHION MOMENT IS... my first L'Uomo Vogue cover with Prada, shot by Bruce Weber
> THE SECRET OF SUCCESS IS... believing
> THE ESSENCE OF STYLE IS... being natural
> MY PERFECT HOLIDAY IS... sun, beautiful surroundings and friends
> ALWAYS... appreciate what you have
> NEVER... whinge about what you haven't got- just make it happen!
Posted by Boaz at 6:41 PM